The Kilamuwa Stela a stele of King Kilamuwa, from the Kingdom of Sam'al. The stele is a 16-line text in Phoenician. King Kilamuwa is shown standing on the upper left and addressing four Canaanite god-insignias with his right arm and finger. His left hand is draped at his left side holding a wilted lotus flower, a symbol of a king's death. He is dressed in king's regalia with hat, and his figure stands at the beginning of the first nine lines of the text.. Basalt 9th-century BC. Vorderasiatisches Museum, Pergamon Museum, Berlin. The text reads "I am Kilamuwa, the son of King Haya'. King Gabar reigned over Ya'diya-(Sam'al) but achieved nothing.
Then came Bamah, and he achieved nothing.
My own father, Haya', did nothing with his reign.
My brother, Sha'il, also did nothing.
It was I, Kilamuwa...who managed to do what none of my ancestors had.
My father's kingdom was beset by powerful, predatory kings, all holding out their hands, demanding to be fed.
But I raged amongst them like a fire, burning their beards and consuming their outstretched hands.
Only the Danunian kings overmastered me; I had to call on the King of Assyria to assist me...
I, Kilamuwa, the son of Haya', ascended my father's throne.
Under their previous kings, the [people] had howled like dogs.
But I was a father, a mother and a brother to them.
I gave gold, silver and cattle to men who had never so much as seen the face of a sheep before.
Those who had never even seen linen all their lives I clothed in byssus-cloth from head to foot.
I took the [people] by the hand and in their souls they looked to me just as the orphan looks to his mother."
"Whoever of my sons comes after me and interferes with this inscription, may he be dishonoured among the people...
And if anyone should damage this inscription,
Let Gabar's god Ba'al-Samad destroy his head,
And let Bamah's god Ba'al Hamon destroy his head..."
Together with Reχub-ʾEl, the Lord of the Palace 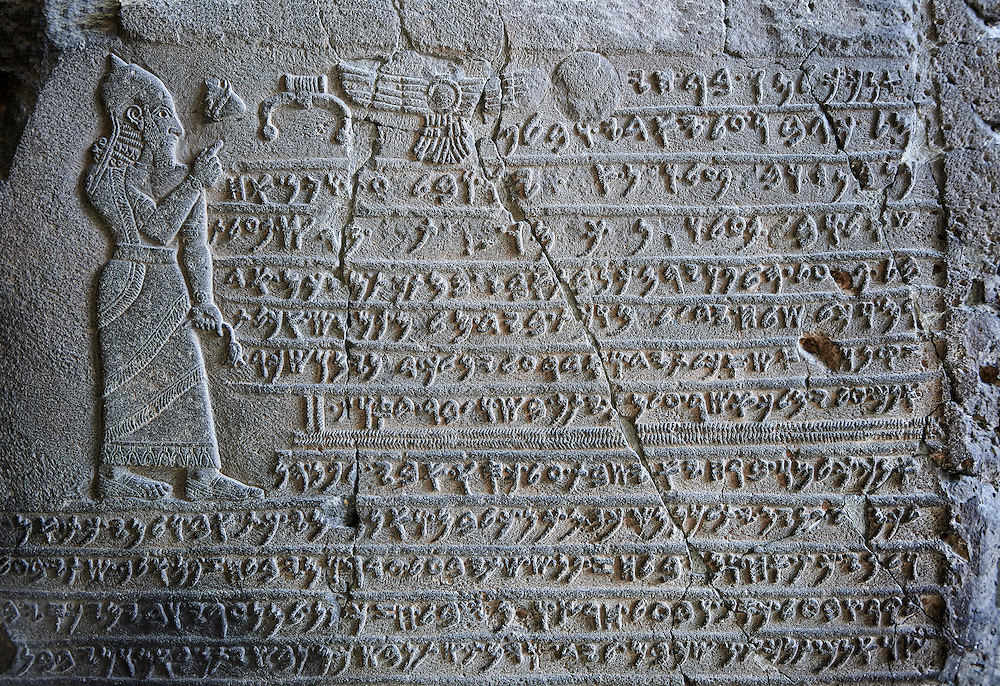