Coffins in the shape of a mummy are known in wood from as early as the Middle Kingdom; in the New Kingdom they are made of stone. The numerous such coffins dating from the Late Period are particularly impressive, especially since their faces, being the optically most conspicuous element of the coffin, have often been carved in the realistic style of contemporary portrait sculpture. The sarcophagus of Pa-nehem-isis [Pnehmêse] is a remarkable example from the Ptolemaic Period, with its large face and its profusion of inscriptions and images, covering the whole surface. The figures have been carved in the hard stone with great precision. The deceased is wearing the tripartite wig and a broad collar. No other part of the mummy's body has been indicated. The rear part of the wig merges into a broad back pillar.
Only the most important elements from the figurative decoration can be mentioned here. On the forehead is a scarab as a symbol of resurrection, flanked by two goddesses. Divided over the two sides are the rare, and for sarcophagi rather unique, depictions of the four winds or cardinal points. Below the broad collar is a pectoral with a winged scarab, flanked by Isis and Nephthys. Below this is a cartouche with the name of Osiris as Wen-nefer, flanked by two seated figures of Osiris. Below this in the first long register is a solar disk with rays flanked by Isis and Nephthys in adoration. Behind each goddess stand four worshipping baboons 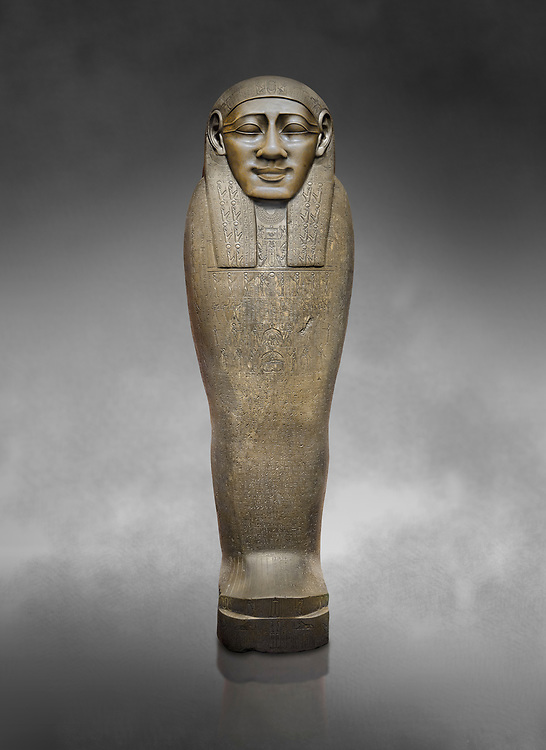